A tropical twist for a cinnamon bun recipe with a filling of macadamia nut and coconut cream, with a creamy coconut sauce drizzled over the top. Make this recipe by blogger Wild Wild Whisk for breakfast. 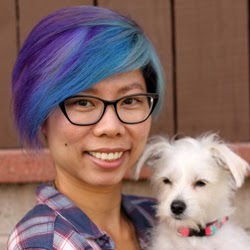 Trang is a self-taught baker, food photographer and recipe developer behind the blog Wild Wild Whisk. A chemical engineer by trade, she is obsessed with ingredients and all the chemical reactions happening underneath the surface of delicious baked goods.

Add cream, milk and C&H® Granulated Sugar to a small saucepan and bring to a simmer over medium heat, stirring constantly, about 5 minutes. Transfer to the stand mixer bowl and allow the mixture to cool down to below 110°F, check with a thermometer.

Sprinkle active dry yeast over the top of the milk mixture, stir and let it bloom for about 20 minutes. The mixture should visibly puff up.

Sift the flour and stir in the salt. Add flour to the liquid mixture and knead with the dough hook on low speed until everything is incorporated and a wet dough forms.

Scrape the dough out onto a floured countertop and knead a few times to form a ball. Place the dough ball into an oiled large bowl, cover with plastic, and allow to rise in a warm spot until double in size, about 2 hours.

Make the filling while waiting for the bread to rise. Chop up the macadamia nut in a food processor, remove the ground nuts and mix it with coconut shred, flour, and salt in a small bowl.

In the same food processor, mix the softened butter and C&H® Light Brown Sugar until creamy. Add the nut mixture back into the food processor and mix again until incorporated.

Beat the egg with the vanilla extract in a small bowl, and pour it into the food processor, process until everything is incorporated and creamy.

Remove the cream filling from the food processor, cover and refrigerate until needed.

Whisk the cornstarch with about ¼ cup of room temperature coconut milk until completely dissolved. Set aside.

Add the remaining coconut milk to a small saucepan along with C&H® Light Brown Sugar and salt. Cook over medium heat, stirring frequently until the sugar dissolves completely and the mixture starts to simmer.

Drizzle the cornstarch mixture into the simmering coconut milk, stirring constantly. Continue to cook for another 2 - 3 minutes until the sauce starts to thicken. Take it off the heat and allow it to cool. The sauce will thicken further as it cools.

When the dough is ready, dump it out onto a floured countertop. Roll and stretch it out to a rectangle 20”x13” with the longer edge facing you.

Take the cream filling out of the refrigerator and add dollops of the filling over the top of the dough. Use a spatula to spread it as evenly as possible over the surface of the dough, leaving about an inch untouched at the top.

Roll the dough up starting from the bottom edge closest to you. When you get to the end, tuck the seam under. If the roll looks uneven, lift it up and stretch it out to make the entire roll about the same diameter. At this point, the roll could stretch out to about 23” - 24”.

Divide the roll into 12 equal portions with a serrated knife. Place them into a buttered 9”x13” baking dish and allow them to rise for another hour until double in size.

Take the rolls out of the oven, use a knife to separate them and drizzle coconut sauce over the hot rolls. Serve warm.

You can also use C&H® Dark Brown Sugar for even a deeper flavor and more molasses taste in the filling and sauce.